General
Back to top

Peakr is a software to simulate 2D solid-state NMR spectra

Parameters to simulate spectra
Back to top

This section of the interface serves to initialize a protein, its chemical shifts, and the internuclear correlations of interest that define a spectrum. Once the required input parameters and data are specified, click on "Create spectrum" to initialize the spectrum. Simulated spectra will appear in the Added Spectra subsection.

Define your protein in this section.

You can define a name for your protein in the Protein Name field. This name will be used for the names of all spectra generated for this protein (see the Added Spectra section).

The protein sequence can be pasted in plain one-letter code or FASTA format into the Protein Sequence field. Alternatively, it will be extracted from a PDB file uploaded via the PDB File upload dialog. If both a sequence and a PDB file are given, Peakr will attempt to map the sequence in the PDB file onto the sequence pasted in the Protein Sequence box. If there are mismatches between the PDB file and the pasted sequence, an error message will be given. Otherwise, the longer of the two sequences will be used. Note that in this case the amino acid numbering might not be identical. For example, if the pasted sequence contains additional residues within a structural element of the PDB file, the numbering of the sequence used for the simulated spectra does not necessarily correspond to the numbering in the PDB file anymore.

If the PDB file contains several chains or models, it can be selected which one should be used for spectrum calculation after initializing the spectrum by clicking "Create Spectrum". Then, chain and model selection is possible in the "Added Spectra" section of the interface (see below). By default, the first chain or model in the PDB file is used.

A PDB file uploaded in the Protein section will also be used for prediction of chemical shifts using the interfaced software tools (see section Chemical Shifts) and for simulation of through-space correlations (see Correlations section).

Chemical shifts can be added from user-provided lists, by PDB-based predictions, or by using database values. Also, combinations of these options are possible.

If a combination of these methods is selected (e.g. Shift list + Simulation), the order of preference for the use of chemical shifts is as follows: 1. Shift list; 2. Prediction; 3. Database. This means that all nuclei for which shift values can be found in a shift list uploaded by the user will be assigned these shift values. Other nuclei will be assigned shift values from chemical shift prediction if available, and database values otherwise. The option "Prediction - Shift list" (i.e. prediction minus shift list) allows to select only those values of a chemical shift prediction for which no values are contained in a user-specified shift list, in order to generate spectra that illustrate which peaks of a spectrum generated using the option "Shift list + Prediction" originate from predictions.

Define the desired correlation for the simulation of the spectrum.

The name defined for a correlation in the Correlation Name field will appear in the name of the spectra generated using this correlation (see the Added Spectra section).

Here, all available spectra are listed. The functions of the buttons and fields available for each spectrum are explained below.

The following points describe tools to select sequence regions and amino acid types to be displayed in the spectrum. After making changes here, click on 'Display selected spectra' in the 'Resultant spectra' section to update the spectrum display.

Select the desired 13C labelling scheme for spectrum simulation. These labelling schemes are obtained by expressing a protein using the respective chemical as sole carbon source.

The option "Graded opacity" displays simulated peaks with varying levels of opacity (i.e., color intensity) according to the probability that both contributing nuclei are 13C carbons in the selected labelling scheme.

Upload experimental spectra
Back to top

Upload processed 2D spectra in the formats of Bruker XWinNMR/Topspin, Varian/Agilent VNMR/VnmrJ, or NMRPipe. For Bruker format, the '2rr', 'procs', and 'proc2s' files of the processed spectrum directory are required. For Varian/Agilent, the 'phasefile' file (typically found in the 'datdir' subdirectory of the experiment's directory in the 'vnmrsys' folder) and the 'procpar' file are needed. Before saving the 'phasefile' in VNMR/VnmrJ (by the 'flush' command or by navigating to another experiment), the entire spectrum must be displayed in VNMR/VnmrJ. For NMRPipe-format spectra, only the .ft2 processed spectrum file is required. Click 'Add experiment' to upload the data.

Analyze spectra
Back to top

Buttons next to the 'Resultant Spectra' section heading allow for downloading a session file containing all data and settings, or the spectra displayed in the spectrum display window in various formats (PNG, PDF, or SVG). 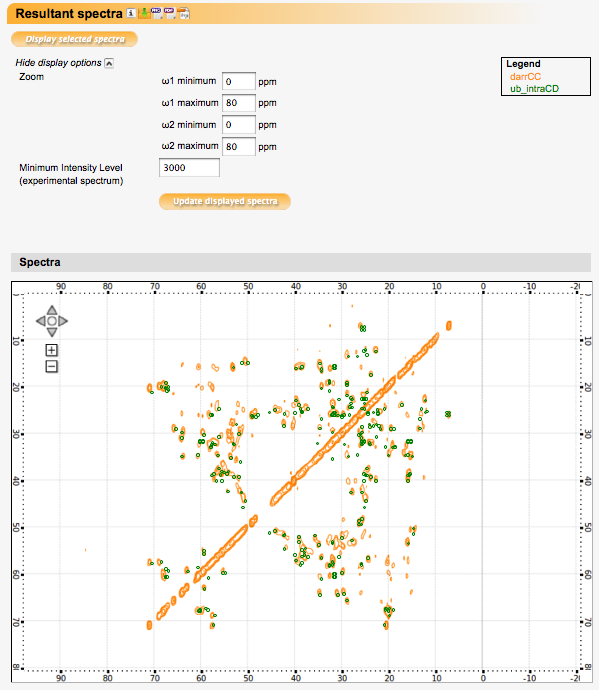 For each selected simulated spectrum, a detailed peak list can be displayed which shows the spectral intensity in the selected experimental spectrum at the position of each simulated peak. For each simulated peak, the experimental spectrum intensity at its exact position (column 'int') as well as the maximum intensity in a defined window around the peak (specified in ppm units under 'List maximum intensity in a window around each peak'; column 'max') is listed. The exact position of the maximum intensity found in the defined window as well as its distance from the simulated peak (in ppm) is also listed (columns 'max_shift1/2', 'max_ppmdist'). For through-space correlation spectra, the distance between the two atoms of the peak (or between their bound protons in the case of NHHC/CHHC correlations) in the PDB file is listed in the 'atom_dist' column.

The intensity value specified in the 'Highlight peaks above' field defines a threshold value. Simulated peaks with corresponding intensity in the experimental spectrum above this threshold (at the exact peak position or in the defined region around each peak, as selected) are highlighted in the peaklist after clicking the 'Calculate' button below the input field. Further selections can be made among the highlighted peaks in the 'Among highlighted peaks select' section. In this section, also the number and percentage of currently highlighted peaks (i.e. peaks above the intensity threshold) are displayed. Predefined selections depend on spectrum type; e.g., in intraresidue correlation spectra, correlations with different numbers of bonds can be selected, or in through-space correlation spectra, correlations within different distance ranges. Number and percentage of peaks in these subclasses are also shown. In addition, individual peaks in the peaklist can be selected using the checkboxes in the leftmost column. Each column in the peaklist can be searched for specified values using the input field at the top of the column.

By clicking the 'Show only selected peaks' button, only the peaks selected in the peaklist will be displayed in the spectrum display window. 'Show all peaks' reverts to displaying all peaks of the spectrum. 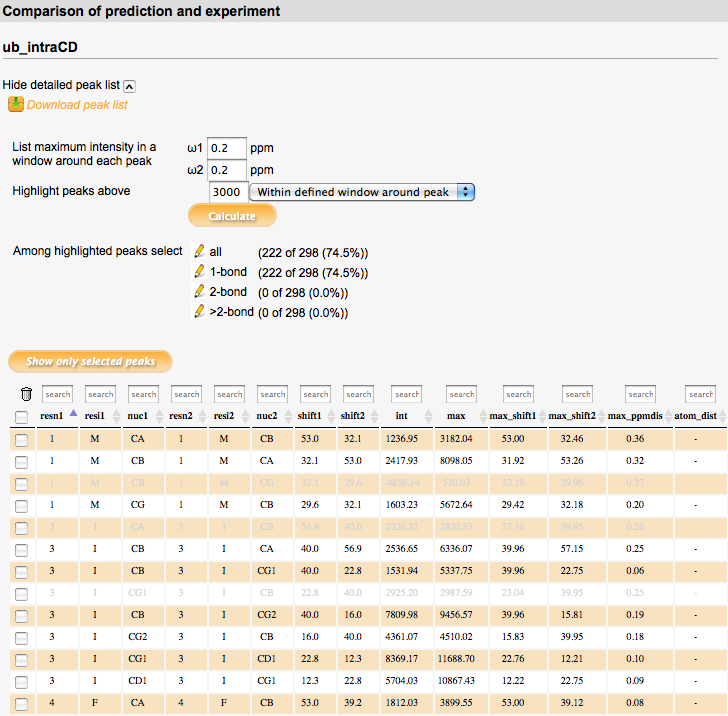